Savoir Vivre cruising the Canal de Bourgogne, France
We received news today from French Hotel Barge Savoir Vivre:
I write to announce some changes to our Sunday pickup times from Dijon station for 2022.
It appears that a permanent change to the TGV train schedule has taken place and the service that we used to recommend, which arrived in Dijon just before 4pm, is no longer being operated.
Instead, a new train is being run which suits us rather well. It is the 14:51pm from Paris Gare de Lyon which arrives in Dijon at 16:32pm. We ask that you direct your clients to this service.
We believe this slightly later arrival will improve our first day experience as guests travelling from Paris will have more time to have lunch before catching the train. The 4:30pm pickup will still give guests ample time to be welcomed aboard, settled in, and to prepare for their first dinner ashore.
For cabin weeks, where some guests will be travelling by train and others might have stayed in a hotel in Dijon, we are changing the Dijon train station pickup time to 4:30pm, too.
In cases where we are collecting a whole boat, private charter group from one hotel in Dijon, the pickup time can remain at 4pm or move to the new pick-up time of 4:30pm depending on guest preference.
Thanks for the update, James. 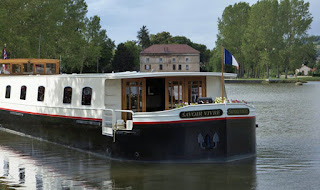 
Savoir Vivre is 80 feet long, air conditioned (central heating, too), and has 4 identical guest cabins which can be configured with either a queen or two twin beds, each having ensuite private bathrooms.

Savoir Vivre is a bit different to the other hotel barges that we represent as they do not have an onboard chef. Pastries for the continental breakfast are supplied by the local bakery. Lunches are freshly prepared and provided by private chef who meets up with the boat with their prepared meal. Dinners are ashore at a different local restaurant every evening (included in charter fee).
Treat Yourself to a Relaxing French Canal Cruise

Visit our website for more info on our barges and barging: www.BargeCharters.com