Click on map to enlarge in new window
Towns & Villages along the Burgundy Canal
The fortified hilltop town of St-Florentin lies at the juncture of two rivers, the Armance and the Armançon, and is one of the first towns on the Canal de Bourgogne when joining the River Yonne. Besides its many stone buildings, its church caps the town (built between 1500 and 1614), which has lovely stained glass windows by the Troyenne school.

Located where the Armançon divides into several channels, Tonnerre is a sizeable town, dating back to the Roman period. A devastating fire in 1556 caused the town to be largely rebuilt. Many of its ancient houses sport red-tiled roofs. Notre-Dame des Fontenilles is a hospital founded in 1293 by Marguerite de Bourgogne, sister-in-law of Louis IX. The main hall of the hospital, the Grande Salle, is 280 feet long with vaulted oak ceilings.

The Fosse Dionne, in the town’s center, is a basin fed by the green waters of a natural underground spring. In the Gallo-Roman period, its waters supplied the hilltop settlement (or Oppidum) for drinking and washing. In 1758, a local nobleman, Louis d’Éon, converted the spring into a washhouse; listed as a historic monument since 1920. Louis d’Éon’s son, Chevalier d’Éon, grew up to be a famous dignitary for Tonnerre. In 1756, he joined a secret network of spies called the Secret du Roi, employed by King Louis XV but without the knowledge of his government. During this time, he infiltrated the court of Empress Elizabeth of Russia by posing as a woman. Later in his life, stationed in London, he helped draft the peace treaty that would officially bring an end to the Hundred Years War. He subsequently became paralysed after suffering from a fall and spent the last four years of his life bedridden. He died in poverty in London in 1810 and is buried in St Pancras Old Church. 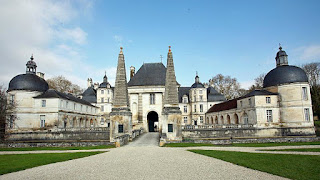 Château de Tanlay
Surrounded by rolling hills where white Charolais cattle graze and where mistletoe hangs from poplars, Tanlay seems right out of a picture book. The Château de Tanlay, built in the 15th and 16th centuries and one of the finest in Burgundy, has a beautifully decorated interior. Surrounded by a series of moats, arcades and iron grills, the château is situated in glorious parkland.

The town of Ancy-le-Franc has a market and a magnificent Renaissance château, which hosted many prestigious guests, including Henry IV, Louis XIII, and Louis XIV who stayed in the Blue Room, or Salon Bleu.

Built in the 16th century by Italian architect Sebastione Serlio, the château has an austere, grey stone exterior, with massive square towers and a grand front entrance. Its lavish interior is richly decorated with carved or painted walls and ceilings.

The church in the small village of Ravières, built in 1701, was added to the list of Historic Monuments in 1913. It is also the site of the once famous “pottery barge,” whose owner would cruise from village to village selling plates, bowls, and jugs.

Montbard is a small industrial town and a metallurgical center. The Comte de Buffon, an iron-master whose industry was an economic boon to the town, built the Forges de Buffon in 1768. The water was damned and controlled to power the watermills which powered blast furnaces. This system was years ahead of its time and was an important influence in the beginnings of the industrial revolution in France. After serious floods, they converted the forge into a cement factory and then ceased activity altogether. The forges have since undergone extensive restorations and are open to the public.

The Comte was also a naturalist, whose daily observations led to the publishing of the Histoire Naturelle over a 40-year period. The town has a Hôtel Buffon, the Buffon Institute, Buffon Park, and the Buffon Chapel where the Comte is buried .

Venarey-les-Laumes is a railway junction and the capital of the Auxois region. The town looks out over the Laumes plain, where Julius Caesar conquered the Gauls in 52 BC at the Battle of Alesia. Caesar’s victory over the combined Gallic forces was claimed to help establish Roman dominance in Gaul for the next 500 years.

Pouillenay is a village famous for the anise-flavored sweets made there since the 9th century. The neighboring village of Flavigny-sur-Ozerain has found more recent fame in the confectionery world as the setting for the 2000 film Chocolat. 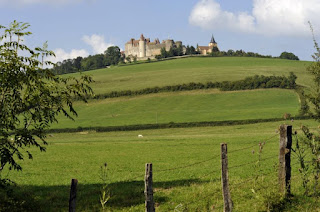 Châteauneuf
Vandenesse-en-Auxois, a quiet village near the summit of the Burgundy canal, and the village of Châteauneuf, with its spectacular hilltop castle, marks the beginning of the Auxois plain.

Pouilly-en-Auxois is a large and flourishing town with a spacious port in a sizeable basin at the summit of the Burgundy canal. The town thrives on agriculture and tourism. Nearby is the fascinating two-mile long Pouilly Tunnel.

Escommes is a hamlet which marks the summit of the canal, and features a loading dock, once used to transport empty barges through the Pouilly tunnel. You can see the turbine house, which provided hydroelectric power for the electric tug, and its sluice gate system to divert water from the canal to drive the turbines and generate power.

Pont d’Ouche is an aqueduct with three-arches carrying the Burgundy canal over the River Ouche. The River Ouche meets the canal here and follows it all the way to the River Saône. Once a center of tile production, barges would carry them as cargo to be distributed and sold in larger towns and cities. There is often an early morning mist and a mirror reflection on the canal surface. At sunset you may see deer and wild boar coming down from the forest to drink.

La Bussière-sur-Ouche has several well-kept stone cottages, and a restored 13th century Cistercian abbey, St-Victor-sur-Ouche. The village is split into two very distinct parts, “La Forge,” which the Burgundy canal runs through, and “La Bussière” with the abbey.

The abbey grounds are a place of calm and meditation where you can walk in the footsteps of the monks. There are beautiful springs, streams and fountains, as well as some unusual buildings, such as a dovecote dating from the 15th century. Also seen in the gardens are tombstones of crusading knights. Today the Abbey is a hotel and retreat. Two streets from the canal is the little Romanesque church L’Eglise de l’Assomption, which features a distinct slate steeple.

The grounds of the Château at Barbiery-sur-Ouche contain a very impressive and renowned collection of wild flowers, and listed with the National Monuments in 2005. On the hilltop are the ruins of a feudal château, once owned by the Marigny family. Nearby at Roche Chèvre are the remains of a Tumulus, or Visigoth burial site, and a cave which could have been used for Neolithic burials.

Gissey-sur-Ouche is a hamlet of approximately 350 inhabitants. With a few canal-side cottages, the Mairie, and washhouse, it is one of the most charming villages along the Burgundy Canal.

Sainte-Marie-sur-Ouche lies in a deep and narrow valley created by erosion-resistant limestone dating from the Jurassic period. Pont de Pany, a hamlet near Sainte Marie-sur-Ouche, was once a very important bread market. A bridge crossing the river Ouche was an important crossroads for trading routes during the Middle Ages.

Fleury-sur-Ouche is a very traditional village offering all the charms of France. There are many small streets to explore, with plenty of little boutiques, a café, and some ancient houses.

Dijon is a modern, growing city with a well-designed canal port. It is the center of the Côte d’Or and was once the capital of Burgundy in the 14th and 15th centuries. Visitors can wind their way through the narrow streets of the old quarter and look around the city’s many museums, the Ducal Palace which opens onto the square, the Parliament Building, and the 13th century Cathedral St-Bénigne with its Romanesque crypt.

Several of the buildings in Dijon have roofs of glazed tiles with varied colours and patterns. And, of course, the mustard merchants sell their product in beautiful faïence jars. It is thought that the recipe for the world-famous condiment dates to the 4th century AD. Don’t miss the city market, where a vast selection of local delicacies is always on sale.

Château de Longecourt built as a fortress in the 12th century, was transformed into a château in the 17th century. In order to be designated a château in France, the property must have a well and a chapel, which is why many châteaux don’t look like castles but stately homes. Further embellishments added in the next century resulted in the neoclassical Italian style home of today. Surrounded by moats and four towers, the Château is in a 100-acre park.

St-Jean-de-Losne sits at the juncture of the Saône and the Burgundy Canal. Even before the advent of the canal, the town was a thriving river port. In 1273, the lords of Franché-Comte laid siege with 500 troops dressed up as women. The town uncovered the ruse and killed all the attackers.

In 1636, 80,000 troops of the Holy Roman Empire threatened St-Jean-de-Losne. With 400 citizens and 150 soldiers, to which were added 800 reinforcements from nearby Auxonne, the town miraculously held off the siege. Thereafter, the town was known as La Belle Défense. In 1870, a German advance was also turned away. Clearly, this is a town which values its independence.

St-Jean-de-Losne has a large basin and was once used to store timber floated down the river. It is now a port used for mooring recreational craft, and today is the largest of its kind in France, and an incredible depot for all things to do with barges. Whether you need water pumps, engines or propellers, St-Jean-de-Losne is the place to come. Every summer a gymkhana or rally takes place for boating enthusiasts. In a restored 15th century house is an exhibition titled “The Barges of St-Jean-de-Losne,” housing a complete collection of barge equipment, hand pumps, bailers, and wooden jacks used to raise boats in dry dock.