This morning we received a very interesting email from Chris of the Hotel Barge SAVOIR FAIRE concerning the Dutch holiday, Queen's Day.


We still have 4 cabins available for our cruise which encompasses the 30th of April 2010. This is the day of the world renowned QUEEN'S DAY.

If you only visit Amsterdam once in your life, make sure your visit coincides with April 30th. Queen’s Day is the annual Dutch national holiday in honour of the late Queen Juliana’s birthday.

On Queen’s Day, there are celebrations throughout the Netherlands. However, the most popular destination is Amsterdam where up to one million visitors join the 750,000 locals in the world’s largest street party.

Queen Beatrix, who succeeded her mother in 1980, decided to keep the holiday on April 30 as the weather on her own birthday, January 31, tends to prohibit outdoor festivities. 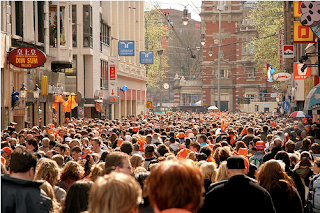 Queen’s Day crowd on its way to an event.
Posted at Flicker by Photochiel

The Night Before Queen’s Day

Queen’s Day festivities start around midnight and last throughout the night (though official rules state that pubs must close for an hour or so before sunrise). Simply walk around in downtown Amsterdam (the Jordaan and Nieuwmarkt areas being among the most popular spots) and you’ll find plenty of partying going on.

That said, our advice is that you pace yourself. You’ll want to be more or less sober for the main feast.

6:00 AM marks the start of the ‘free market’ – a street market where half the population sells their bric-a-brac, used clothes, and crafts for next to nothing. Where? Everywhere people live. What? Well, you’ll find anything from broken toys, last year’s Queen’s Day purchases, and fantastic bargains on musical instruments, electonics, software and everything else under the sun.

Throughout the city, professional street performers vie for attention. There are pick-up bands, aspiring opera singers, teenage rappers and street discos. Rio-style drum bands have been very popular the past few years.

Huge outdoor concerts are organized at various locations, such as Dam square and Museumplein.

The throngs lining the streets and canals wear orange, the national color (after all, the Queen hails from the House of Orange). Take ‘throngs’ literally – particularly in the city’s center where you’ll be shoulder to shoulder with other revelers. 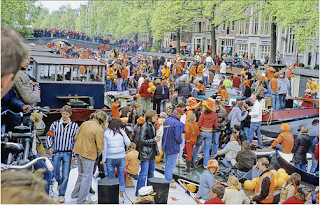 Brouwersgracht on Queen’s Day
Posted at Flicker by Ron Layters

(Ron says  "This is actually a canal, crowded with boats full of people celebrating the Queen's birthday in Amsterdam. Not much water on show! If you haven't been you should come as it is the greatest street party on earth. ok - it's a canal party as well!)

By way of indication: you can normally saunter from Central Station to Dam Square in about 7 minutes. On Queen’s Day the same distance will take you at least an hour. For most of the day, there is no public transport in the center of town. The canals offer little relief as thousands of boats, large and small, filled with party goers clog the city’s waterways.

The beer flows freely, though mostly in the form of reduced-alcohol ‘event beer,’ which is served in plastic containers that come with a deposit fee.

If you are coming to Amsterdam from out of town, take the train.

View SAVOIR FAIRE's online brochure and also check out their various itineraries, then contact us for more information.  Spring will be here soon!

The French hotel barge Enchanté offers a new theme cruise (Antiques) for this Spring 2010 in Provence.

The 88th International Antiques Fair is taking place over Easter weekend on April 2-5, 2010 in the delightful riverside town of L’Isle-sur-la-Sorgue, famous for its antique shops and markets.

For the March 28th and April 4th departures aboard Enchanté, there will be the opportunity to spend time exploring the antique shops of Pezenas, Arles and Mèze, and, of course, a day wandering around the hundreds of stalls at the big event on Friday, April 2 or Monday, April 5.

The French Hotel Barge LA BELLE EPOQUE has added another special Guided Walking Tour week to their calendar. This is a very popular cruise (no special supplement for the Guide) and we hope that for those of you who were disappointed that this cruise was no longer open, that you can now take advantage of this new week, October 10-16, 2010. 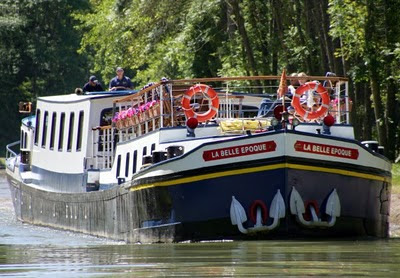 There is NO extra charge or supplement for this special Walking Tour cruise whose itinerary is between Pouillenay and Tonnerre in Burgundy.

You can view their walking tour itinerary HERE.

Of course, if this week on La Belle Epoque appeals to you and you don't want to participate in the guided walks, that's OK too!

There are some good deals on hotel barges. Some require that you confirm your booking before 31 March 2010.


We hope you will be able to take advantage of these current special offers.

Olivier has lowered the rates for the 2010 season on his beautiful, luxury boutique French hotel barge, ALEGRIA.... a private, all inclusive, 4-person barging cruise for under $20,000 per week! 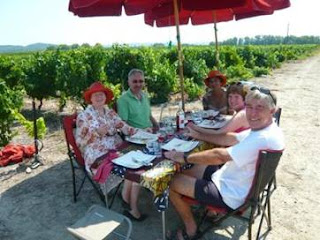 Enjoy a picnic in the vineyards
Alegria's rate might be reduced, but rest assured that the quality of the charter and the level of pampering has not!


Alegria cruises the canal du midi in the south of France between Beziers and Carcassonne, but Olivier is open to special requests, such as eastwards to the Petite Camargue and Aigues-Mortes, for example, or  above Carcassonne in the direction of Toulouse.

Do you need an extra Valentine's gift?

If you feel the need for a bit of an "extra" Valentine's gift for that someone special, what could say more than a European barging trip ... except perhaps, a yacht charter sailing vacation :)


Offer the gift (represented by a toy boat maybe? or a nice bottle of French wine?) and then start planning your charter with Paradise Connections.

Contact Paradise Connections Yacht Charters to book your barging holiday
Visit our website: www.BargeCharters.com
Posted by All the best! at Monday, February 15, 2010

For a selection of luxury crewed hotel barges we represent, please visit our web site, view our blog, read our monthly barging newsletter, or contact us!

A barging cruise is a wonderful vacation for singles, couples, family, friends, and corporate trips too!

Come and explore the European waterways aboard a quality, luxury, all inclusive, crewed boutique hotel barge.

We are very pleased to be adding the French Hotel Barge ROSA to our collection of barges.

Rosa, a 1907 Dutch Tjalk Clipper Barge, will be re-launched in southwest France in August 2010 after being completely refitted to a high specification.

You may have already seen Rosa who was featured in the very successful BBC television series, French Odyssey with Celebrity Chef Rick Stein.

Rosa is fully air conditioned and will accommodate up to 8 guests. Her flexible layout will have two double-bedded and two twin-bedded staterooms, with full ensuite private bathrooms. The salon is particularly welcoming and features attractive wood panelling, comfortable seating and a cosy bar. The remodelling will ensure easier access directly onto the good sized sundeck and not via the side decks as previously. Rosa has an enthusiastic new French owner and an experienced crew of 4.

The Luxury French Hotel Barge ALEGRIA, cruising the canal du midi in the south of France

Wouldn't this be a great Valentine's Day gift? It could also be an excellent wedding present for a honeymoon or future vacation.

Can you believe it's February already! Seems like we were just celebrating the new year :)

We hope you will be able to take advantage of these current special offers.

Contact Paradise Connections Yacht Charters to book your barging holiday
Visit our website: www.BargeCharters.com
Posted by All the best! at Monday, February 01, 2010