Today we have another informative guest post from the French Hotel Barge SAINT LOUIS who offers both private charters and cabin cruises in the Aquitaine & Gascony region of southwest France.

UPDATE: August 1, 2013. What a coincidence. Today Amazon.com sent me their "Kindle Specials of the Day" email and it includes a book that ties into this post very well...
Today's price is only $1.99. I'm going to buy it because it looks interesting.

THE PILGRIMAGE IN SOUTHWEST FRANCE
- By Alasdair Wyllie, Owner-Operator of Barge Saint Louis

During our cruising season we very often moor our hotel barge the Saint Louis in the tiny port of Pommevic, between Moissac and Lamagistere.  There is a full canopy of trees, and during the summer it can be quite pleasant to get some shade in the heat of the day.  Generally, no other boats are moored there, and we have for company the occasional boat passing between the locks, some of the local residents whom we have come to know  -  and a steady trickle of Pilgrims passing along the towpath. 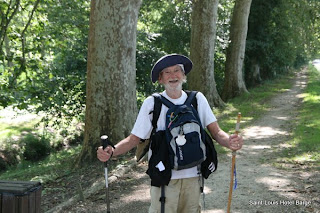 A pilgrim at Pommevic – complete with stave and scallop

For a distance of some fourteen kilometres between Moissac and Pommevic, one of the main pilgrimage routes to Santiago di Compostela passes along the tow path of the canal.  This is Christendom’s third most important place to visit, after Jerusalem and Rome, and it is certainly the most important Christian pilgrimage in the sense of a holy destination reached after a long-distance trek.

In the early years of the 9th century, according to tradition, a hermit monk called Pelayo was led by a star to the burial place of St James the Apostle, and his find was confirmed as being the remains of St. James by Todemito, bishop of the most westerly diocese in the Iberian peninsula.   This part of present-day Spain is the region that James chose to come and spread the Word after the death of Christ, and it was to this coast that his remains were brought in 44 A.D. after he was martyrised by Herod Agrippa.  There is no hard evidence that the remains found by Pelayo were indeed the remains of St James the Apostle, but the evidence was sufficient at the time for the Church and the State to give immediate acceptance of the claim.  Perhaps the absence of hard evidence does not matter – the fact remains that there was established at the place a shrine to St James the Apostle, and very soon a pilgrimage to the shrine developed.

The pilgrimage to the shrine developed within the population of Iberia, and then in the year 947 the first foreign pilgrim arrived – he was the Bishop of Puy, who had travelled over the Pyrenees from France.  Between then and the fifteenth century the pilgrimage was busy, and indeed it was at its busiest in the twelfth century.   Imagine, if you can, the conditions that these pilgrims had to endure at that time, and the risks they took.  Long staves, for protection, were part of every pilgrim’s essential equipment, as was a scallop shell displayed on the body, for identification.  (The scallop shell is the emblem of St James, the “logo” of the pilgrimage, and  the French for scallop is “coquille St Jaques”  -  “St James’ shellfish”)  Many of today’s pilgrims keep the tradition going by carrying a stave and displaying a scallop shell. 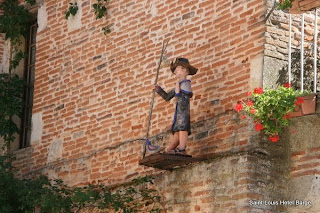 A pilgrim statuette in nearby Auvillar

I am often asked where the pilgrimage starts.  The simple answer is that there is no starting point – there are feeder routes across Europe, from Ireland in the west to Austria and Poland in the east.  Hence, the pilgrims represent a multi-cultural and a multi-lingual society.  Although the pilgrimage is clearly of Christian origin, there are many people who are doing it as a classic long-distance walk with no religious connotation.  It is essentially Slow Travel!

As part of the parallel between the pilgrimage and Slow Travel, it is interesting that one of the very first Traveller’s Guide Books was written as a guide to the pilgrimage – the Pilgrim’s Guide “Codex Calextinum was written in the 12th century!

It is interesting to discuss with today’s pilgrims their motives for what they are doing.  I very often hear from people that their motives, their rationale, indeed their whole way of thinking have changed along the way.  There is the classic statement “One’s pilgrimage does not end in Santiago – it begins there”.  Perhaps this is a bit like a luxury cruise on the Saint Louis, in which you have the time and the surroundings to be able to reflect on the world around you. 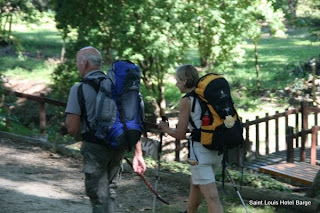 Meanwhile, back at Pommevic, the pilgrims can enjoy the fact that they only have 1,200 kilometres left to go!

It's not how far nor how fast, it's the pleasure of the journey that keeps people coming back for more.

There is ONLY ONE cabin available for this highly popular barge cruise & guided walking tour aboard the French Hotel Barge LA BELLE EPOQUE in Burgundy, France. 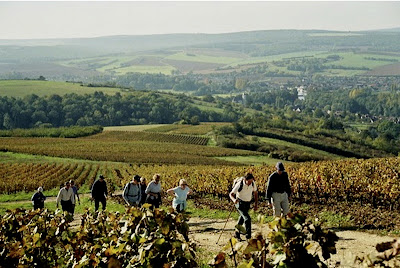 2013 DATES and AVAILABILITY:
With autumn colors transforming the countryside, this is the perfect time of year to explore Burgundy with its rolling landscape, quaint villages and ruined castles.

You can view the full itinerary for the Guided Walking Tour cruise on La Belle Epoque's brochure. The difference with this theme cruise is that it is available for individuals or couples to book a cabin and join others on board. No need to charter the whole barge and no extra supplements to pay for the services of the professional walking guide.

If you are part of a couple and not as keen about walking as your "better half", pas de problème... There are other activities available if you wish, or you can just chill out on La Belle Epoque and watch the countryside glide by while listening to tunes on your iPod or reading a book in the jacuzzi!

La Belle Epoque has been designed with both elegance and passenger comfort in mind. This all-inclusive deluxe barge is 128 feet long, has two interior deck levels (fully air conditioned & heated), a crew of 5, and accommodates up to 13 guests in 7 cabins, each with private, ensuite bathrooms. The salon & dining room has beautiful wood panelling, with an always-open inclusive bar. The sundeck has steamer chairs, recliners, parasols, a large dining table, and a Jacuzzi spa pool. They have 12 touring bikes, plus a tandem! These, together with other luxury facilities, create a vessel perfect for a relaxing, luxurious cruise.

Burgundy is among the most popular hotel barging areas in Europe. It is renowned for its vineyards, Gothic churches, Renaissance châteaux and picturesque villages. This is a region of France in which gastronomic delights and the art of living have reigned supreme since Roman times.

Sounds good? Contact Paradise Connections and let's get started. As you can see, this is a very popular cruise and it books up quickly. Don't miss this opportunity!

Now that spring is here we hope you have been rejuvenated and are ready to make your 2014 vacation plans with your "better half", friends and family.

We have some new specials offered this month that include summer weeks. Scroll down this page to find special discounts for Private Charters, Individual Cabin Bookings, Singles, Special Events, and the 2015 Barging Season.

The 2014 season is filling up fast. If you haven't booked your barge trip for this coming season, don't wait too long as availability for some weeks are very limited. Contact Paradise Connections now, for current availability and pricing.

We hope you can take advantage of these special dates for your barging cruise vacation.

A note about private charter discounts...


Some of the barges have a fixed amount off of their full-barge rate. Quite often this special rate will be less expensive than their normal 6 or 8-person rate, for a 10-pax barge for example.
Please note that you can be a smaller group than the maximum number of passengers that the barge can accommodate.

NO single supplement for select cabin cruise weeks: Save $1800-$2000. (This offer cannot be used in conjunction with other special offers).

Our Cruises are All-Inclusive:

This morning we received our weekly newsletter from Carcassonne and it had a bit about their celebrations for the Fête Nationale on quatorze juillet (14 July, Bastille Day).

For those of you who will not be in attendance this year, here is a video from 14 July 2012. It is very good footage but nothing like being there in person with the beautiful colors, the sounds of the rockets taking off, the percussion of the soundwaves striking your body, the oohs and ahs of the crowd... Good stuff. The French can really put on a show :)


This video is from the producers of firework spectacles, Ruggieri.


We will be on our boat in Saint Croix (at least it has a French name!) and we will be raising a glass or two of pastis over the weekend while listening to Radio Nostalgie on our TuneIn Radio android app.

Take the time and enjoy a Hotel Barge Cruise along one of the many European waterways this summer. We represent barges in Ireland, Scotland, England, Holland, Germany, Italy and, of course, France (Burgundy, Gascony, Canal du Midi, Loire, Alsace-Lorraine, Champagne...) 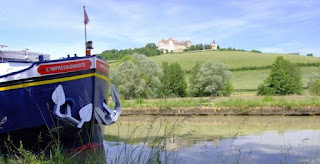