Through the French Canals (Paperback)
by David Jefferson

Book Description
Through the French Canals has probably tempted more people to explore the beautiful waterways of France than any other publication. Now in its ninth edition, this comprehensive guide includes new photographs and practical information on local facilities, distances, heights and depths. It will be invaluable to anyone planning a cruise on the French waterways or a passage from the English Channel through to the Mediterranean. --This text refers to an out of print or unavailable edition of this title.

Review
"Erasmus Kloman and his wife, Sue, travel to France every year. This is really a how-to book, punctuated with anecdotes from his family trip - with teenagers! Along the way in his descriptions of the villages and places they pass he gives the history of the area and as mentioned before sprinkles in a few recipes that are specialities of the region. What struck me as I read the book - yes I'm ashamed to say it - it almost sounds like too much work! As I reflected on my fading fantasy, I realized that most accounts I'd read so far had been trips on what Mr. Kloman calls "hotel barges", rather than his chosen method of "bare barge". So, I remembered that what is important, even more so on a barge, is the journey, not the destination and the fantasy is returning.

Inland Waterways of France: Cruising the canals and rivers of Europe, on your own Dutch barge or canal boat [DOWNLOAD: PDF] (Digital)

Book Description
Traveling on the canals and rivers of Europe aboard your own vessel is an ideal way to visit as as many as 14 countries and experience their culture and customs of life. Cities, villages and the countryside are often very accessible by natural or man-made waterways.
Cruisers can travel at their own speed and on their own route, stopping almost anywhere to spend a night or a week. You can bring your own affordable hotel right into the center of many major cities, or find a secluded anchorage amidst peaceful surroundings. You can rent one of several thousand boats available for holiday cruises, or find a barge or a canal cruiser of your own. EuroCanals Guides offer detailed information and comments to help narrow down the many choices of where to go and how to do it.

Through Europe at Four Knots: A Tale of Boating Mayhem and Family Adventure (Hardcover)
by Les Horn

Book Description
In 1990, teacher Les Horn had a brainstorm: why not navigate Europe's inland waterways, from England to Greece, in a small sailboat? Much to his surprise, he sold his wife and preteen son and daughter on the idea, and the following summer, installed in their 24-foot fixer-upper, Alea , the Horns set sail on the family odyssey chronicled in this amusing, satisfying tale. Traveling at a snail's pace, foraging for provisions, and propelled more by British pluck than by their temperamental outboard motor, the Horns eventually made it to the Aegean, but not without their share of uproarious misadventures in France, Germany, Austria, Czechoslovakia, Hungary, Yugoslavia, Bulgaria, and Turkey. Combining a wry sense of humor with a journalist's eye for the telling detail, Les Horn weaves a shrewdly funny family farce within a delightfully engaging travelogue packed with vivid observations of Europe's variegated landscape, history, and people. A rousing good read for both actual and armchair sailors, travelers, and adventurers.

The European Waterways: A User's Guide (Paperback)
by Marian Martin

Book Description
Anyone who admits to a sense of confusion when confronted with the bewildering array of European waterway signs, signals, rules and regulations will find this book a blessing. --This text refers to an out of print or unavailable edition of this title.

Book Description
This beautifully photographed handbook covers historical sites and scenic attractions, as well as shore facilities, repair yards, and much more. --This text refers to an out of print or unavailable edition of this title.

Midwest Book Review
Now in this updated and expanded fourth edition, Hugh McKnight continues to draw upon his nearly four decades of experience and undeniable expertise in making Cruising French Waterways an essential reference and guidebook for anyone wanting to sail or motorboat along one of France's 5000 miles of waterways. Extensive descriptions of scenery and historic locales make Cruising French Waterways as ideal for armchair travelers as it is for vacationers whetting their anticipation for what to expect. Black-and-white and color photographs offer a glimpse of the ancient wonders waiting to be discovered. Packed with detail cover to cover, Cruising French Waterways spares no effort to explore the depth and beauty of the scenic French countryside.

A Culinary Journey in Gascony: Recipes and Stories from My French Canal Boat (Paperback)
by Kate Ratliffe

From Publishers Weekly
Ratliffe offers readers an armchair culinary journey on her 80-year-old Dutch barge, the Julia Hoyt, her "one-table restaurant and two-room hotel,'' as it traverses 88 kilometers, 21 locks, 19 villages and six courses along the Garonne River in southwestern France. After aperitifs and olives come such simple delights as Garlic Soup and Two-Celery Soup. In true French fashion, an entree comes next, an opener such as Grilled Ham with Figs, Wild Mushroom Pie or Salad with Sauteed Fresh Foie Gras. The main course might be Roast Pork Stuffed with Prunes and Shallots, Braised Beef in the Gascon Style or Pan-Grilled Stuffed Trout. Following French custom, a separate vegetable dish comes next, designed to contrast with the main course: for example, a celery root puree after a garlicky roast guinea fowl. Desserts are simple: Summer Fruit Custard Tart, Two-Peach Gratin, Goat Cheese with Armagnac and Honey. Fashioned for preparation in a small galley-kitchen, the recipes are classic ones, often accompanied by a little truc (trick or personal touch) such as adding bittersweet chocolate to a stew. Recipes, maps, photographs and essays on local products and people combine to create almost the satisfaction of being aboard the Julia Hoyt on her leisurely course.

Watersteps Through France: To the Camargue by Canal (Paperback)
by Bill Cooper, Laurel Cooper

Book Description
When Bill and Laurel Cooper decided to spend the winter in the South of France, they took their seaworthy but half finished Dutch barge Hosanna by an "overland" route throguh the canals and rivers of France. Along the way, they passed through a number of out-of-the-way places, made a wonderful variety of friends and had a great many adventures.

Book Description
Many tourists' trips to France are dominated by that country's cosmopolitan capital; Floating Through France reveals a rural side of France that is seen less often, but is just as compelling as Paris's urban excitement. The essays in this collection explore the areas surrounding the unique, picturesque Canal du Midi. The oldest functioning canal in Europe, the Canal du Midi started out as a shortcut for bustling commerce in the 17th century and is now a United Nations World Heritage site and one of the most beautiful, evocative features of the French countryside. Featuring essays from notables such as Linda Watanabe McFerrin, Larry Habegger, and Joanna Biggar, as well as up-and-comers, and poetry and photo-sketches, Floating Through France is perfect for those traveling to France or those who just want to feel like they're there.
Posted by All the best! at Tuesday, July 25, 2006

$500 per person discount off the current rate for:
Where no cabins are booked on a cruise, a minimum of 4 passengers are required to guarantee the cruise.

For more information on this special and anything else that may come to mind, contact Paradise Connections Yacht Charters: CLICK HERE
Posted by All the best! at Wednesday, July 12, 2006

This week we have updated our web site for the French canal hotel barge, EMMA, who cruises along the canal du midi, France.

Here's a new photo of EMMA that Liz just sent us! 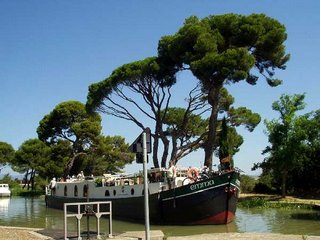 CLICK HERE to view our web site for EMMA.

For more information, contact Paradise Connections Yacht Charters: SEND US AN EMAIL
Posted by All the best! at Tuesday, July 04, 2006

We had a note from the French Barge LE PREMIER this morning, letting us know that they only have one week left for their 2006 season: August 27 to September 2, 2006.

For more information on Le Premier or other boats, contact Paradise Connections Yacht Charters: SEND US AN EMAIL
Posted by All the best! at Tuesday, July 04, 2006