We have been busy creating a new brochure for the French Hotel Barge CLAIR DE LUNE and it is now online. 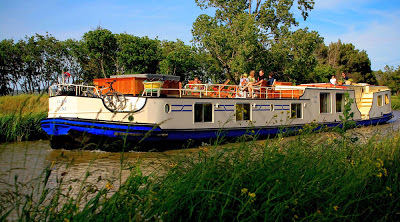 Clair de Lune cruises the Canal du Midi between the charming village of Le Somail and the fortified city of Carcassonne, where you will discover some of the most beautiful scenery in the south of France along the way.  During your voyage along the tree-lined Canal du Midi you will visit historical sites such as the spectacular Cathar town of Minerve, the elegant city of Narbonne, and enjoy wine tastings at renowned local domaines.

You can find lots of information about Clair de Lune in our new online brochure such as sample itineraries, rates, crew, cuisine & wine aboard including sample mentus, and details about the barge's layout, accommodations and amenities. Feel free to contact us if you have any questions or if you want to book!

As you probably know, September is one of the most popular months for barging and it books up fast. But, you are in luck... Clair de Lune has September 1-7 completely open so they are available for a private barge trip for up to 6 guests or book an individual cabin and open up a cabin cruise week. They also have one cabin available for the week of September 23-29, 2013.

Spring is the perfect time to enjoy a hotel barge cruise on the Canal du Midi in Southern France for many reasons:


VIDEO: Hotel Barge Cruises on the 330-year old Canal du Midi in the south of France

VIDEO: Hotel Barge Cruises on the 330-year old Canal du Midi in the south of France

It's the ideal time for hotel barge cruising and we are now offering great savings (EXPIRED) on four of our hotel barges for selected cruises in Spring 2013:

ANJODI: up to 8 guests in 4 cabins 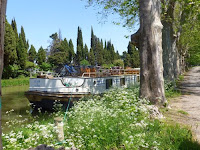 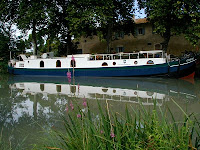 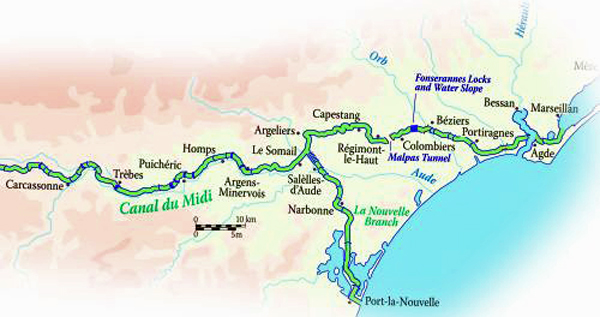 Take a trip through gorgeous countryside and medieval cities of southern France.

The 300-year old Canal du Midi skirts the sun-drenched shores of the Mediterranean before meandering inland through ancient villages, Roman fortifications and famed vineyards. This canal is defined by its beauty, lined with plane trees and crossed by pretty arched bridges. The Mediterranean weather and pace of life is relaxed and lulls you into unwinding as you cruise sedately along.

This is the perfect place for cycling or walking along scenic tow paths, or simply watching the scenery pass by as you relax on deck with a cool drink. In the distance you can see the Pyrenees, whereas closer to hand are the vineyards that stretch for thousands of square miles. Enjoy private wine tastings at chateaux en route, locations that vary with your choice of barge.

Contact Paradise Connections Yacht Charters to book your barging vacation cruise
For more information on our barges and barging, visit our website : www.BargeCharters.com

L'Impressionniste travels through the renowned wine-producing region of Burgundy cruising between Fleurey sur Ouche and Escommes along the Canal de Bourgogne, France.

This hotel barge accommodates up to 13 guests in in 7 cabins, each with private ensuite bathrooms. Her light and airy interior features picture windows and selections of prints, fabrics and wall colorings reminiscent of the turn of the century era after which she has been named.

You can have a private, full-barge charter or you can book a cabin and meet new friends on a shared charter week.

For more information about the Barge L'Impressionniste, visit their online brochure HERE... Then contact Paradise Connections to book your barge trip.

Don't want to rush you but the barging calendars are already rapidly filling up for this season. So please don't put it off any longer :)

We have a new barging video to share with you. Take a few minutes out of your busy day. Sit back and relax while you travel with the French Hotel Barge l'Impressionniste along the Burgundy Canal in France.


Burgundy boasts some of the world’s finest wines with around 60,000 acres of sunlit vines and arguably the prettiest canals in France. The Burgundy Canal (canal de bourgogne) winds its way in smooth curves through the heart of renowned wine growing areas such as Chablis, Côte de Beaune and Côte de Nuits, or rises steeply through a flight of locks that appear like staircases.

The Nivernais Canal meanders alongside the picturesque River Yonne, through a largely undiscovered region near the Morvan Hills, passing sleepy villages and Charolais cattle grazing in the lush pastures. This is the original home of hotel barging with its hand-swung bridges and old logging sites, and where time seems to have stood still for centuries.

The landscape around the Burgundy Canal is one of rolling hills eroded over the centuries and covered in forests of oak, maple and pine and where spring, summer and autumn each leave a unique signature. Medieval towns are surrounded by unspoilt countryside and the wonderful markets have stalls brimming with fresh local products cultivated on the fertile plains.

This is a region with a vast variety of cheeses, in all shapes, sizes and colours, strong in character or mild and fresh and all can be enjoyed with full-bodied red Burgundies, or perhaps with lighter white Chablis wines. Burgundy’s gastronomic tradition is certainly rich and diverse and a sedate cruise on a hotel barge along one of its delightful waterways will allow you to indulge in good food and wine, two of the real pleasures in life.

Here are a few of the barges we represent that cruise the canals of Burgundy:

The French Hotel Barge Saint Louis still has a few openings this Spring for private, full-barge charters, as well as individual cabins on cabin cruise weeks in May and early June (2013). Inquire for other weeks later on in the season.

Alasdair says that this is a fabulous time of the year with perfect weather, early summer flowers, and nightingales singing in every hedge.


The hotel barge Saint Louis cruises the beautiful calm waterways of southwest France, including the historic lands of Aquitaine and Gascony along the Canal de Garonne between Montauban (near Toulouse) and Agen or between Agen and Castets-en-Dorthe (near Bordeaux).


Saint Louis accommodates up to six guests in three staterooms configured as doubles or twins, upon request. Your hosts, Alasdair and Barbara, together with their friendly and expert crew, will ensure that your holiday or vacation is the ultimate in relaxed pleasure.

We still have cabins available for the special Vogalonga Regatta Cruise week...

The Hotel Barge LA BELLA VITA has a special 7-night itinerary for the week of the Vogalonga Regatta in Venice Italy, May 18-25, 2013. 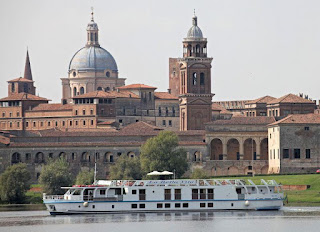 The Vogalonga Regatta started in 1975, as a small gathering of Venetian rowers expressing their love for their lagoon and as a peaceful protest against the influx of motorized boats. Motor boats have a devastating effect of eroding the banks of the lagoon and canals, and eats away at the beautiful, historical buildings. The idea of the regatta is a get-together of people-powered boats having a friendly race through the Venetian lagoon. 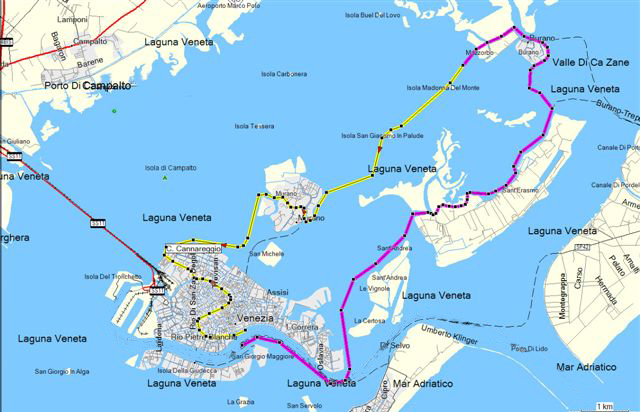 The track has remained virtually unchanged over the years. It covers about 30km by way of canals and makes its way through the most beloved and picturesque parts of the lagoon. Participants have up to 6 hours to complete this event. The boats gather in St Mark’s Basin, in front of the Ducal Palace on the morning of the race to sing hymns to St. Mark and Venice, after which, they’re off! The route bypasses the island of Saint Helena, skirts the islands of Vignole, Sant'Erasmo and San Francesco del Deserto. The half-way point is Burano and the return path passes the islands of Mazzorbo, Madonna del Monte and San Giacomo in Paludo, the procession then crosses through the Murano Grand Canal and is then back in the lagoon. Once in Venice, the boats row along the Cannaregio canal and the Grand Canal, arriving at the finish line at Punta della Dogana in front of San Marco.

Upon completion of the regatta, each participant receives a commemorative medal, a certificate, and souvenirs of the event. Prizes are also awarded, including numerous pairs of oars, oar locks, trophy cups and plaques. What started off as a small gathering of around 500 local boats from Venice and neighboring cities, is now an international gathering of over 1500 boats from around the world.

Following the success of the Vogalonga and on the wave of re-discovered love for tradition and the call to save the city, more than 50 rowing clubs sprang up in Venice and the surrounding area. The entire city contributed to the re-establishment of workshops dealing with restoration, as well as the construction of boats and oars; knowledge of which had nearly disappeared. Boats which had long since disappeared from the lagoon were recreated, having formerly only been seen in works of art by the great Venetian landscape painters such as Pietro Longhi and Francesco Guardi. Among the traditional boats which have regained interest are the mussin and the vipera, as well as the pupparini, gondolini and gondole da fresco. 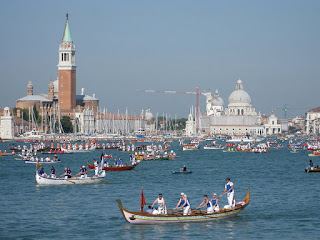 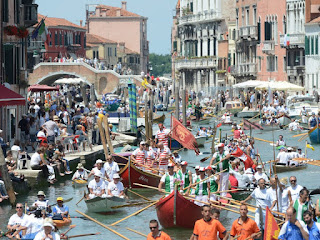 The beauty of the lagoon passages, the enthusiasm of the rowers, and the opportunity to see, even for just one day a year, Venice as a river of thousands of boats, has transformed the Vogalonga into a splendid sporting event.


LA BELLA VITA is a 20-passenger vessel that was recently refitted in 2010-11 to high standards to offer comfortable, fully air-conditioned accommodation. There are two upper-deck suites and eight cabin staterooms, all with private ensuite bathrooms, and a bright spacious dining room/bar area. Louvred doors open to the side decks to give a perfect viewing platform, whilst above is a huge sun deck with comfortable sun loungers.

Cruises aboard La Bella Vita includes comfortable, air conditioned accommodation in en suite cabins which can be configured as twins or doubles, gourmet meals, open bar, fine wines, daily escorted excursions, entrance fees, local transfers and the use of barge facilities such as bicycles to explore the towpaths and a large sundeck to laze on.

SPECIAL OFFERS FOR THE 2013 BARGING SEASON

Our Cruises are All-Inclusive: