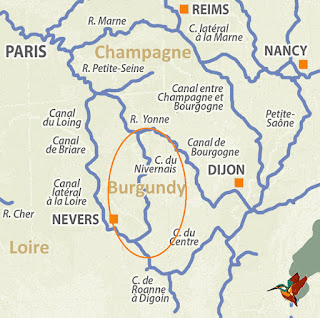 Canal du Nivernais
The Geography
The Nivernais Canal, which stretches for 111 miles with 119 locks, passes through western Burgundy crossing the River Yonne and, from time to time, merging with the river itself. North of the summit at Baye, the River Yonne serves as a navigation channel for most of the way between Clamecy and Auxerre and, where the canal is artificial, the Yonne serves as a feeder for the canal’s water supply.
Sixty Years of Chaotic Work
The Nivernais Canal opened in 1843 after sixty years of construction and was primarily built to transport firewood from the Morvan Forest to Paris. Since the 16th century, the Yonne was used for “flottage de bois” – a system for floating logs downstream. Whereas most rivers and canals were used by barges transporting cargo, these logs were literally floated down the river in their thousands in rafts. Men called “flotteurs” rode on these rafts with poles to prevent jams in much the same way as the North American lumberjacks of more recent times. As the firewood demands increased, there was a need to transport logs from further away and so the requirement for a canal.
The Timber Trade
The Nivernais Canal was first proposed in 1708 but abandoned due to opposition from the Duke of Orléans who, not coincidentally, was proprietor of the nearby Loing Canal. At the end of the 18th century, a project was started to extend the “floatable” part of the river towards the forests of Bazois by building a small channel in a tunnel under the hills of Collancelle. However, since this was the era of canals, the project of a small channel for floating timber was expanded to become a navigable waterway. Work started in 1784 (based on an earlier plan) and was finally completed in 1841.
The wood trade was the region’s main source of income until the 1920s, even when timber had to be carried on barges after flottage was outlawed in 1881. The canal saw the last of its commercial traffic in the 1970s and today, a shallow draft and small gauge locks limit the size of barges that use it today to 30m (100 ft) in its upper reaches.
Unspoiled Countryside
Today the Nivernais Canal is known for its tranquility, its beautiful valleys and hills, and its historic and picturesque villages and vineyards. Its path through the hills of Morvan, the wild valley of the Yonne, and the green meadows of Bazois. Enjoy the Canal du Nivernais aboard Hotel barge L’Art de Vivre.
Inquire / Book Now

The 8-passenger L'ART DE VIVRE was built in England during World War One as a supply vessel to the Allied troops battling in the Somme. Many years later, l'Art de Vivre was transformed by a team of skilled craftsmen into a floating celebration of the Burgundian "good life". She was renovated in 2009, and is continuously maintained to a high standard.

She is very much a traditional barge in style, with original wood and brass features that emphasise her heritage and create a warm and inviting interior atmosphere. The comfortable cabins all have modern en suite facilities and the delightful saloon combines contemporary seating with more traditional furnishings.L'Art de Vivre is 100-feet long, has air conditioning and central heat, and accommodates up to 8 guests in four cabins that can be configured either as twins or doubles according to your preference.

Outside, there is a sun deck to relax on with a glass of wine as you glide through the pretty Burgundy countryside and a spa pool to soak in. You can explore the ever-present towpath on foot or on one of the barge’s bicycles, before rejoining L’Art de Vivre at one of the locks up ahead
The crew of four, comprised of Captain, Tour Guide, Master Chef and Hostess, all have a love for the Nivernais canal and are secure in the knowledge that their vessel represents L'Art de Vivre itself.
This region of Burgundy on the edge of the Morvan hills, with its charming villages and centuries-old history simply oozes charm and your cruise aboard L’Art de Vivre is a journey back in time along a magical waterway.