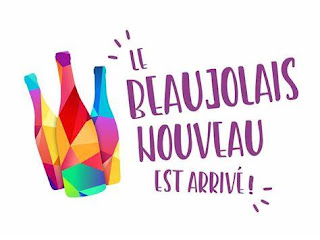 
It's not just the wine that is celebrated, it is also a chance to honor the stunning region of Beaujolais and its people. It is on this date that the region comes alive with fireworks, music and festivals. In fact, there are over 100 festivals held in the region in honor of the event, the most famous of which is in Les Sarmentelles de Beaujeu, the capital of the region.


How is Beaujolais Nouveau Made?


This fresh and fruity wine is made from Gamay grapes and must be harvested by hand. They are then kept in a huge sealed vessel filled with carbon dioxide. As the grapes at the bottom are crushed and start to ferment they give off more CO2, which aids the fermentation of the uncrushed grapes, too. This is a process called "carbonic maceration" and is the key to the short fermentation process with a fresh and low-tannin flavor.


Originally, Beaujolais Nouveau was consumed only by locals as a budget-friendly primeur (young wine) to toast the end of the harvest. Unlike other wines, standard vintages have a short shelf life of around six months.
The Race to Market


It is perhaps this short lifecycle that has encouraged the worldwide race to bring the wine to market in November each year. The slogan “Le Beaujolais nouveau est arrivé” has adorned banners and posts all over the world to advertise the arrival of the wine, although the new slogan “It’s Beaujolais Nouveau Time” was introduced in English-speaking countries in 2005.


Mark the Occasion in Style


This fresh, young wine is the perfect choice for serving slightly chilled, and paired with a selection of good French cheeses and charcuterie. Often described as a party wine, it’s the perfect excuse for marking the occasion with friends.

A cruise aboard a Hotel Barge in France is an excellent way to experience wine and culture. You may even choose a wine-themed cruise.


Visit our website for more information on our barges and barging: www.BargeCharters.com