The French Hotel Barge ROSA which will begin chartering in Southwest France in August 2010 after their refurbishment, is offering a 25% discount for full-boat, 8-passenger, charters in September and October 2010. 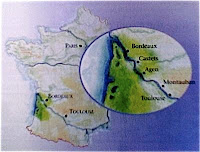 Rosa's new route between Agen and Montauban on the Canal des Deux Mers features the best that Gascony has to offer, including private wine, Armagnac and foie gras tastings; the picturesque French countryside; and interesting excursions.

You may have already seen Rosa who was featured in the very successful BBC television series, French Odyssey with Celebrity Chef Rick Stein.

Rosa is fully air conditioned and will accommodate up to 8 guests. Her flexible layout will have two double-bedded and two twin-bedded staterooms, with full ensuite private bathrooms. The salon is particularly welcoming and features attractive wood panelling, comfortable seating and a cosy bar. The remodelling will ensure easier access directly onto the good sized sundeck and not via the side decks as previously. Rosa has an enthusiastic new French owner and an experienced crew of 4.