Birds of Prey on the Celtic Waterways

Birds of Prey on the Waterways For the wildlife enthusiasts among you or those that are in the market for a thrilling new experience, here's an exciting prospect for you. You can now be treated to magnificent demonstrations of the art of falconry as part of our hotel barge classic cruises aboard the Spirit of Scotland and Scottish Highlander in Scotland; and Shannon Princess in Ireland. 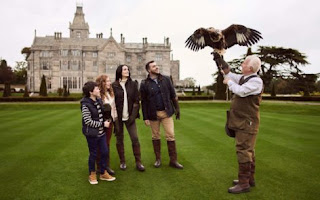 These striking displays feature aerial acrobatics from birds of prey that include falcons, hawks, eagles, owls, and vultures. Set against the backdrop of the Scottish Highlands, or the walled gardens of a stately manor in Ireland, guests are also invited to get "up close and personal" with the birds, as they perch and take off from their arms, swooping high above the countryside.  It's all part of a rather spectacular day which will culminate in a delicious dinner ashore at a local restaurant where you’ll have certainly have plenty to talk about! 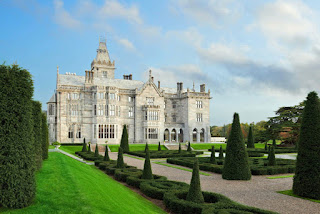 
Naturally, the scenery is a big part of the experience, and we’re spoiled for choice. Adare Manor, Ireland, is a romantic neo-gothic delight, sitting on the banks of the River Maigue. Its facade of brilliant stone and wood carvings is a welcome reminder of the lavish and intricate planning that once went into constructing such buildings.  It is also, one of the few remaining examples of a calendar house, consisting of 365 stained-glass windows, 52 chimneys, 7 pillars and 4 towers, marking each of the seasons. The 840-acre estate surrounding the manor is somewhat of a pastoral paradise with sloping, verdant fields giving way to ancient forests and traditional French-style gardens that one could easily spend days exploring! 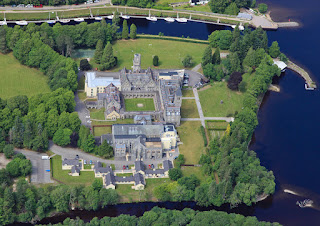 
The Highland Club, Scotland, is a spectacular set of private residences and a former 19th-century Benedictine monastery set on the banks of the famed Loch Ness. Set within 20 acres of beautifully landscaped grounds on the southern shores of the loch it occupies the Grade A Gothic buildings of the original 1729 English fortification, Fort Augustus, which were later transformed into St Benedict’s Abbey. In terms of natural beauty, this is a spectacular venue to participate in a Falconry display. The sight of these majestic creatures buffeting about on the wind above one of the world’s most famous lochs, is one that will live long in the memory.