The French hotel barge ANJODI has a new summer 2012 route along the canal du midi in the south of France. 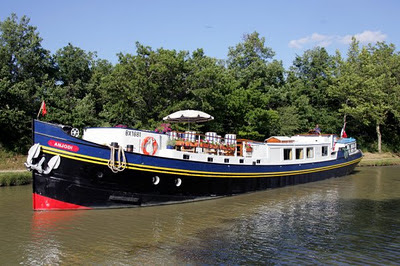 French Hotel Barge ANJODI - Barging cruises in the south of France - Canal du Midi
Anjodi will cruise their normal route between Marseillan - Le Somail beginning March 25 through July 7, then have a one-time only cruise week from Le Somail to Bram for repositioning to their new summer route of travelling between Homps and Castelnaudary (July 15 through August 18). Thereafter, they will recommence the Marseillan - Le Somail barge trip and then, beginning October 28, Anjodi has an itinerary of Marseillan - Beaucaire for the remaining two weeks of their season.

Click on map to enlarge
Anjodi is a classic Dutch barge that was rebuilt for charter to specifically navigate the canal du midi. The barge is 100-feet long with a crew of 4, has both air conditioning and central heating, and accommodate up to 8 guests in 4 cabins with private, ensuite bathrooms. Anjodi has a spacious sun deck with teak furnishings and a jacuzzi/spa tub.

Anjodi is available for private, full-boat charters and also for cabin cruises where you share the barge with others.

For private charters, we have special themed itineraries for Anjodi:

Most all barges have bicycles available for their guests to ride along the canals or visit local villages and nearby towns, but Anjodi also offers "Biking Plus". For people who want to be a little more adventurous and perhaps work off that delicious on-deck lunch, this option (no extra charge) enables you to explore further afield along interesting routes that have been carefully researched. Clearly marked maps and a backpack are provided so that you can explore the local countryside for an hour or two before rejoining your barge a little further along the canal. Anjodi carries 8 touring bikes, plus a tandem!